In this unprecedented time, around the world, folks are getting creative with how to connect with each other and how to keep our spirits up. Actor John Krasinski started a news show from his home office, complete with a hand-painted sign from his daughter. In his web series, Some Good News,  he draws together all the ways in which people are caring for one another all around the world; from an 11 year old girl who writes letters of appreciation to postal workers to grandparents who devise special outfits so that they can safely hug their grandchildren, people are getting creative about how to show each other love. While the success of the series leans somewhat on his fame and previous work, the episode from May 10th already has over 12 million views, it is clear that part of this series’ success is that there is a deep desperation for some good news. And, this, I believe puts us in a somewhat similar place as the 1st century Christians.

The communities of people to which Saint Peter is writing in our epistle lesson today find themselves dispersed and in the exile. He gives general advice throughout the whole letter about ways to conduct yourself, household codes, and the like, but the center of this whole epistle is the impulse that the early church felt to share the good news. No matter their struggles, which were vast, the center and the grounding of this letter is continually one of Christian hope. Our text today picks up as Saint Peter encourages these young Christians to not loose heart, that as they endure suffering, to trust that they are sharing in Christ’s sufferings. Keep the faith and let our shared Christian hope be the ground upon which you stand, even as things will come along to tempt you away from this grounding, and in the end, we will be called to eternal glory in Christ.

One of the more helpful things that have been shared with me throughout this season is a chart that maps the collective phases of trauma response. There is a disaster, and then as is often the pattern, the community comes together, is cohesive and integrated, but as time moves along, disillusionment sets in and things come crashing down. Eventually things level out and return to a new sense of normal, but this process can take a long time, especially when you are in the middle of the grief of the disillusionment phase. 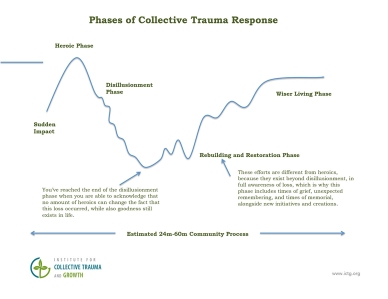 This week I have been wondering if we are perhaps on a similar part of this recovery journey as the dispersed early church was; I’ve begun to wonder if they said to themselves for years after Christ’s death, “we will get through this, we will get through this together” and then as things began to close in, that suffering became a difficult burden to bear. I don’t know about you but I’m finding it harder to hold to that hope as the cohesiveness that we felt two months ago begins to wane.

These days, suffering is so readily available, and I’ll always be one to be against comparing one person’s suffering to another. But, even if we aren’t currently suffering, let us not confuse that with the false belief that no one is suffering. If we look around and all we see if the suffering of inconvenience, perhaps we ought to ask who is suffering so that we might maintain the status quo. When we find ourselves in a place in which we aren’t actively suffering, perhaps that is an invitation for the sake of our faith to follow the lead of those who are. When I look to those who suffer greatly, a key to their resilience amidst that suffering is that they don’t give up hope. Beloved, do not be surprised, but don’t give up hope.

As Christians, our identity, our hope, has to rest in how we follow Christ alone. It cannot come from the political party on our ballot or whether or not we think masks are an effective tool to use at this stage of the pandemic. Our hope cannot be based on maintaining who we thought we would be or what we thought we would do three months ago. In our suffering, it can only come from the deep and abiding hope that Saint Peter talks about in his letter to those first century Christians; it can only be one that is shaped by our time spent in prayerful hope. And as we move about this week and the next month and the next year and all the fiery ordeals it will inevitably hold, we have to remember this letter from Saint Peter. We have to remember that our hope is built on nothing but Jesus Christ. We have to remember that we are called to go out and share the good news, to pray, and to be witnesses to the hope of the resurrection, fiery ordeal or not. So, beloved, do not be surprised, but don’t give up hope.

A sermon delivered to the people of Christ Episcopal Church in Bowling Green, KY via livestream for Easter 7A on May 24, 2020.