The old hymn begs the question: “Were you there when they crucified my Lord?” Again and again it asks those who sing it or those who hear it to think about their own role in the crucifixion of Christ, even as we are centuries removed from that event. I would sing this hymn in my youth with my eyes closed, harmonizing with those standing next to me and I have vivid memories of the pew or patch of grass or the nursing home rooms from which I sang this hymn; it is a convicting song because it forces us to realize the ways in which we are complicit in an event that we weren’t even part of, but that definitely affects how we, as Christians, live our lives. 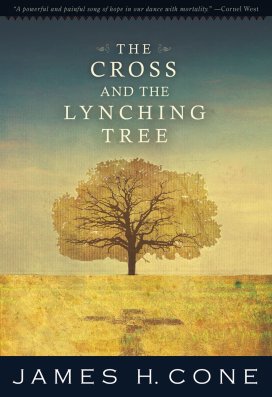 My understanding and intention when I receive Eucharist has changed from when I was first baptized, but I remember holding that bit of bread and meditating on Christ death and resurrection, even as a young child. Even still, I don’t know that I ever understood the reality of the cross and resurrection until I read James Cone’s The Cross and the Lynching Tree.

As a young white girl raised in the South, I knew the face of overt racism, but I was shielded from the abundance of covert ways in which racism not only saturates many parts of our society, but also from the white supremacy and systematic racism upon whose shoulders I now stand as a white woman. The veil has been lifted and my eyes have begun to see some of the ways that I benefit from a system that I hate, but so much of my life is shaped by a system that privileges my whiteness and punishes other’s non-whiteness (the reality that the statement “black lives matter” is an affirmation that upsets people is the clearest example of this).

Early on in seminary, one of my theology professors was known for constantly asking us “what is your norm?” Having a norm is crucial; it is the plumb line that guides everything you do, it shapes the minute choices you make even without your realizing it. For Episcopalians, the norm is the three-legged stool: scripture, tradition, and reason; the choices we make are informed by these three things, it is ingrained into our worship and into our prayers. My Christianity is only thing that is closer to my identity than being an Episcopal clergyperson, and the norm that guides how I live every day is the crucified and resurrected messiah.

Which is why when I first read Cone’s The Cross and the Lynching Tree, it felt like a ran into a wall; I didn’t understand before then all the ways in which my whiteness shaped how I understood the cross, and I’m still learning. It wasn’t until I saw the image captured by a photographer at a lynching (which was then distributed as a postcard), of the white faces standing, having been entertained by the violent murder of a black body, with his feet dangling above them that I realized what it meant to hear the question, “were you there?” Cone posits that in America, we no longer have the cross, but in our very recent history we do have the lynching tree, and these two things are intimately related. “The cross and the lynching tree,” Cone says, “can help us to know from where we have come and where we must go.”[1]

Was I there at Charlottesville this weekend, or do I hold to the ideas of white supremacy or racism? No. The evil and the hatred that motivated the protest and the violence that emerged out of Charlottesville this weekend is indeed wrong. Racism, both systemic and individual, is a sin, this is for certain, but if we think that it is removed from the life and death of Jesus, then we terribly mistaken. Charlottesville should affect how we walk through this world, because while there wasn’t a lynching reported[2] this weekend, the hate that drove that protest is not far removed from the hate that drove black bodies to the tree or Jesus to the cross.

One has to have a powerful religious imagination to see redemption in the cross, to discover life in death and hope in tragedy. What kind of salvation is that? Salvation through the cross is a mystery and can only be apprehended through faith, repentance, and humility. The cross is an ‘opening to the transcendent’ for the poor who have nowhere else to turn – that transcendence of the spirit that no one can take away, no matter what they do. Salvation is broken spirits being healed, voiceless people speaking out, and black people empowered to love their own blackness . . .  Because God was present with Jesus on the cross and thereby refused to let Satan and death have the last word about his meaning, God was also present at every lynching in the United States. God saw what whites did to innocent and helpless blacks and claimed their suffering as God’s own. God transformed lynched black bodies into the recrucified body of Christ. Every time a white mob lynched a black person, they lynched Jesus. The lynching tree is the cross in America. When American Christians realize that they can meet Jesus only in the crucified bodies in our midst will they encounter the real scandal of the cross.[3]

[2] And, lest we think that lynchings are entirely a thing of the past, this death was investigated as a potential murder just two years ago.