There is an unfolding trend among wealthy technology executives and the super rich: doomsday shelters. These are not shelters far out in the woods owned by those who are disconnected from reality, but these are high-tech, solar-paneled retreat options for those who fear society’s collapse around them; the Survival Condo Project is actually an underground, elite group of condos in Kansas which includes a pool, shooting range, and a medical wing, around which the above ground entrance is guarded with men dressed in combat gear and a sniper post. Those who are flocking to these types of shelters to prepare for a day when things finally break down, according to a New Yorker article published this week, are not solely from one religious, political, or social camp, they are Democrat and Republican, gay and straight, they span across traditional fault lines. These underground bunkers have been developing for a while, but what is clear is that the fear that is driving this desire for security isn’t going away.

Throughout this past week, I, too, have been afraid.

I am afraid for those around me who are already holding the short end of our society’s stick. I’m afraid for those who seek asylum or refuge in our country; I’m afraid for those whose lives have been marred by religiously motivated violence who now suffer from fear motivated legislation. I am afraid for those who may loose the healthcare of which they are desperately in need; I fear the fact that those who dictate laws about women’s rights and bodies are not, themselves, women. I’m afraid at the sheer and blatant denial of climate change, and I fear for the part of the earth which we call home. This week has not been marked by the type of fear that bolts through one’s body, initiating the flight or fight response, but rather it has been a slow and creeping fear that gradually begins to shade everything I see and all that I do. This fear has been so pervasive that it is hard to parse out exactly when it began and it’s hard to imagine when it will subside; the fear that I have felt, and maybe you have too, began to cloud my sense of identity. What is the role of someone in my position to play?  As people of faith in this country, do we accept the challenges that this week has brought and choose to ignore those who suffer? Do we let fear become our new normal?

In his first letter to the church at Corinth, Paul writes to the church to help to remind them of who they are in the face of pressures from the outside. In our passage from 1st Corinthians today, Paul reminds those at the church at Corinth that the way of following Christ does not often lead to success and power. The successful and the powerful of the first century, the Jewish scribe and the Greek philosopher are mocking these early Christians for one basic thing: that their faith rests in such a foolish thing as the cross. In a turn that sounds almost blasphemous, Paul uses the words “foolishness” and “weakness” in describing God, but he then turns this on its head; God aligns Godself with those of lowly birth, the poor, and the weak for one reason: God chooses them, “God chose what is foolish in the world to shame the wise; God chose what is weak in the world to shame the strong; God chose what is low and despised in the world, things that are not, to reduce to nothing things that are” Paul said. God’s foolishness and God’s weakness, by very nature of being paired with God, is wiser and stronger than humans can imagine. Paul highlights the simplicity of the community at Corinth, not their powerful positions; they live into their baptismal covenant not by force, power, or sheer will, but because they know that the way of the cross is, at its heart, foolish.

The foolishness of the way of the cross, the idea that the Messiah would be executed in such a shameful way doesn’t negate their devotion, but increases it. Christ lived his life in such a way that the powers that be sought to execute him. The cross confronts the fear of change, and the crucifixion of Christ was an attempt to maintain the status quo, an attempt to stifle the faith of the believers. In an attempt to send a message that this life is not worth living, this man is not worth following, the pressures from the outside seemed to say, who would dare follow someone so aligned with weakness and foolishness? Paul encourages those at Corinth to do exactly that and reminds them that their faith and their lives are not defined by power and how others perceive them, but rather their faith and their lives are marked by their hope in Christ.

At the exhortation of Paul, we look not to the powers and the powerful around us to quell these fears; we need not seek to become the powerful or those with the loudest voice to remind us of who we are. We are baptized into Christ’s church; our faith and identity does not rest in our position in the world. Yet still, as we rest firmly in the identity of the cross, this does not free us from boldly proclaiming the reality of the cross. The reality that God makes God’s presence known in this world through the incarnation of a child to a vulnerable teenager fleeing religious persecution who lives a life that was marked by criticism of those in power, who went on to be crucified because of his actions and life is what motivates us to look into the face of the fear that we feel when we begin to feel lost in a world marked by fear.

We look into the face of fear and we boldly claim that our faith is rooted in the crucified and resurrected Christ, and it is this foundation upon which we move through this world. Sisters and brothers, we must remember, as Paul urges, the calling put upon our lives when we were baptized into Christ’s church and refuse to live a life defined by fear. To live a life that is ruled by fear is to live a life that can easily fall short of the way of the cross.

The way of the cross is not one that makes sense to those who do not believe. By worldly, human standards it makes sense to try to spend our lives obtaining as much security as possible for ourselves, even if it is at the cost of the safety of another. It is wise, the world may say, to care first for self, and then if there is time, energy, or funds left to spend them on others. It is wise, one may say, to boast in one’s own power and ability to rule over others. This, however, is not the message of the cross.
To follow the message of the cross is to boast in the power of serving and loving God, even when it defies our human wisdom. Paul concludes his exhortation about the folly of the cross by referencing Jeremiah when he says “Let the one who boasts, boast in the Lord.” This boasting of being in the Lord is not using one’s position of being aligned with the Lord for personal gain and advancement. The 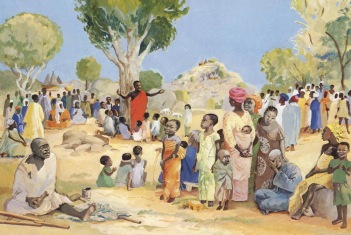 prophet Jeremiah frames this boasting, not as pride in one’s position of power, but, rather, in understanding and knowing the Lord. This knowledge is to be intimately aware that God, to quote Jeremiah, acts with and delights in “steadfast love, justice, and righteousness in the earth” (Jeremiah 9:23-24)