All around was the throbbing hum of insects; underfoot was a lush bright green grass and in every direction, there were giant trees, every shade of green imaginable. The summers of my childhood were spent out in the wilds of middle Tennessee, not too different from Southcentral Kentucky, catching frogs and fishing in the creek. The day summer camp I went to was as a child was on a vast farm, and we largely had the ability to roam and explore what those long summer days had to offer us. 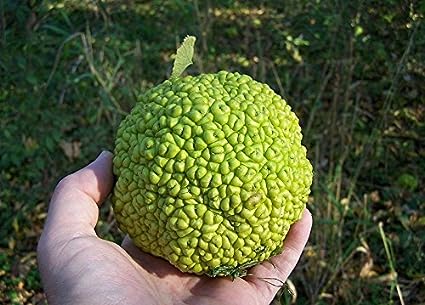 I viscerally remember so much about the backdrop to my childhood summers, but one of the things that stands out is the neon green, bumpy, bizarre looking fruit of the Osage orange tree that we called a hedge apple; and I never got past how they sort of looked like a brain, the patterns of the outer skin folding in waves, and the insides mushy and messy. There wasn’t a summer that went by that I didn’t ask the question, “what is this fruit?”

The lectionary text in the gospel makes us ask a similar question. To start, the gospel passage begins with folks telling Jesus about the horror that happened to the Galileans at the temple. No doubt, word of Pilate’s horrific actions of mingling the people’s own blood with attempts to offer sacrifices to God would have gotten around. Jesus responds with a rhetorical question that hits hard to a common assumption of the time; Jesus responds by asking if the people think that the Galileans were worse sinners and if that was the reason that they suffered so terribly. In a time in which it was common to equate sins committed and suffering endured, this was not an unreasonable assumption, but Jesus shuts this down. Following his rhetorical question about an act of violence, Jesus brings up a natural disaster, 18 people died when the tower fell. But they were also not worse sinners than others; their suffering was not related to their worth. Jesus then, rather than addressing the common assumptions of the time, uses the moment to remind the people that life is short and enters into a parable about the unfruitful fig.

Luke’s version of this parable differs from Matthew and Mark, in which a similar parable is told about Jesus cursing a fig tree, but here in Luke the fig tree isn’t cursed, it is unfruitful. In the parable, the gardener convinces the owner to give the unfruitful fig tree one more year, in the hopes that extra effort and care will produce fruit.

The tragedies that Jesus names directly are specific examples of situations that everyone around would have known. And while so much has changed between Jesus’ time and ours, this is not one of them. We could very easily replace Jesus’ reference to horrific violence of Pilate with the despicable terrorist attack that killed 49 Muslims while they were praying their prayers in New Zealand last week and we could replace the natural disaster of the tower falling with the tornadoes that ripped through Alabama three weeks ago killing more than 20. And just as in Jesus’ time, do these people’s suffering indicated that they are somehow greater sinners or outside of God’s love and protection? No, of course not. Suffering is not on a 1-1 ratio with sin, but it’s not entirely disconnected either. Sin, without a doubt, causes suffering, but suffering does not necessarily indicate sin.

When tragedies like New Zealand or Alabama occur, there are many who are quick to affirm their thoughts and prayers, but what is the fruit of these thoughts and prayers? How are our lives changed by what we pray; how is what we are producing changed by our intentional care for those who are suffering? The fig tree represents those who look healthy, but don’t produce fruit, or those who say the right buzzwords, but produce no hope. Those, perhaps, who quickly jump to Easter without walking through Lent; those who want the resurrected Messiah without the crucified Christ. Those who want fruit without taking care of the tree; those who want forgiveness before asking for repentance or changing their hearts.

Last week in children’s church, I posed a question to a group of our young parishioners, “What season are we in?” Two hands shot up into the air, “Winter!” and “Spring!” were enthusiastic answers that rang true as we walk through the transitioning seasons. Nature moves in seasons, entering into spring after a cold winter is glorious, and with each season brings the question of “what is the fruit?” What is the fruit of the season past and what might be the fruit of the season to come? The church year also moves in seasons, from Pentecost to Advent to Lent, we walk through the seasons of the church year, and with it brings that very same question, “what is the fruit of our time and prayer this season?” How will we be changed during this season of Lent; what fruit will we bring forth? Our lives, also move in seasons, and we can ask the same question of it; there will be seasons in which there is no fruit, no obvious signs of all the work that you might be undergoing, and there will be seasons in which there will be an abundance of fruit, but an important thing to remember is that God is with you during all of these seasons.

So, a question I have of you today, is what is the fruit of you being here; how are you changed because you sat in these pews and prayed these prayers and received that holy communion? There’s no doubt that for some of you it is an unfruitful time, and I think is important to know that it’s okay, because dormant is not the same as dead and often what appears to be dead is occasionally quite active, those barren trees outside will not be barren for long, and sometimes your church needs to be a hospital. Sometimes, the church needs to be a space in which you can come and heal and rest and spend a season or two restoring your soul.

But once you have rested, it is time to get to work; so, what is the fruit of your being here? As you leave this space, think deeply about how you might spend the remaining days of the season of Lent and about what fruit might come forth from your work and prayer, ask what might be the fruit of this season of your life. There are very real and concrete ways in which you can engage your faith here at Christ Church, perhaps a fruit that is developing within you could best connect with the Sacred Conversations group or HELP ministry or welcoming our neighbors to our Wednesday Community Lunch; the list is long, but don’t let that list contain you, dream big about what fruits God might be calling you to bring forth and take it God and see what might develop both outwardly in our bodies and inwardly in our souls, as our collect for today says.

Lent is about reorienting our lives to God; it’s about figuring out what is the center of our lives and to make sure that our faith in the hope of the crucified, resurrected Messiah guides our steps. So, what will be the fruit of this season? What will be the fruit of your prayer during this season of the church year and of your life? As you pray and continually turn and return to the God who loves you, pay attention to what fruit God might be growing within you, and may you have the grace and courage to live them out.